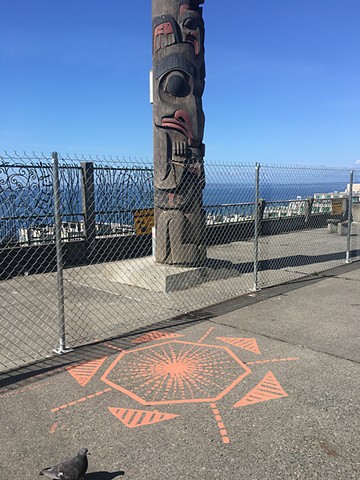 The pattern was painted to heal John's soul from the trauma, heal the Earth that has held the blood of so many Indigenous bodies slain by white men, and heal his family and community from the traumatic loss of his light in the world.

As I began painting two people who knew John T. Williams approached me and asked me what I was doing, happy that I was remembering him in this way. One was a Bitterroot Salish Elder named Coomsta Matt, he had carved with John, and sung and made music with him in the park. For the next few hours we talked as I painted.

He told me what he saw in the pattern, he saw the hoop of the world, the Pacific Rim and the nations surrounding the Pacific Ocean, the sun. Coomsta blessed the pattern with a few songs and we danced one of the songs around its seven sides, with a Salish love song, uniting all the people of the Pacific Rim. Lemlmts (lem-lempsh--Thank you) Coomsta for teaching me some Salish words and making this healing pattern complete through your song, blessing, dance, and companionship.